Centre for Military Studies is this year number 21 out of 110 of the world’s leading international think tanks on defence and security. CMS has been in top 25 at the last 4 surveys done by University of Pennsylvania in which experts evaluate think tanks on the basis of quality, reputation and impact. That CMS once again is among the best shows the Centre’s ability to produce research of high international value, while bridging the gap between the academic and policymaking communities.

Security barometer 2017: Russia and Brexit
CMS has recently published its yearly security barometer, in which persons chosen on the basis of their special knowledge, insight and experience on foreign, security and defence policies, evaluate the current security situation in Denmark and the rest of the world. Among other issues, the barometer once again concluded that Russia has a great impact on Danish foreign and security policies, but also Brexit will be of great importance.

Green Defence, Maritime Security and Russian influence
2016 has been a busy and productive year at CMS and the Centre’s research has expanded from green defence policy to maritime security, and Russian politics in the Arctic. In Unfolding Green Defense the possibilities for and the advantages of a green defence policy is examined. The report was followed by a seminar in which both researchers, government officials and representatives from the defence industry discussed green defence strategies. In Maritime Security and Development in Africa, Danish and international security policies in and around Africa are examined, and in Baltic Sea Security, a long with Hybrid Maritime Warfare and the Baltic Sea Region, the increasing Russian influence in Baltic is examined. The strained relationship between the West and Russia is likewise assessed in Russian Policy in the Arctic after the Ukraine Crisis. Other publications by Centre for Military Studies in 2016 have been: Soldater i Europas gader, Byen’s Prisme, Forbedring og Fornyelse af FN’s fredsarbejde, and Læren fra F-16, however these are only found in Danish. 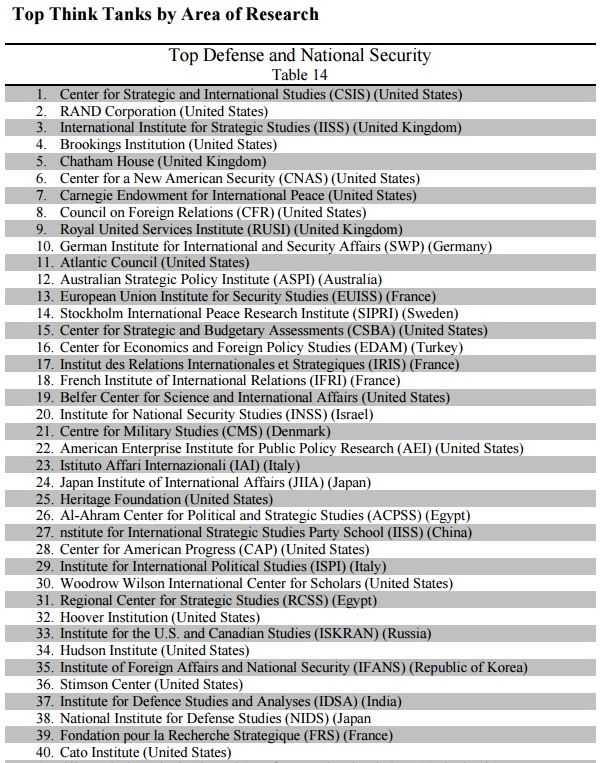 Think tanks in the world

The ranking is done by the University of Pennsylvania’s Think Tank and Civil Societies Program. Since 2007 it has established an annual panel consisting of several thousand experts with deep knowledge about think tanks with the aim of ranking their colleagues. This year 6.846 think tanks were ranked within 52 different categories. Access this years Global go-to Think Tank Index here.

Centre for Military Studies (CMS) was founded in 2010 in collaboration between the Danish Ministry of Defence and the political parties behind the defense settlement. CMS is one out of a number of research centres at the Department of Political Science, University of Copenhagen.

The Centre focuses on policy-relevant research and research-based information and innovation that identify options for Denmark’s defence and security policy in a globalised world. Research at the Centre is thus a means to identify policy options in a complex, interconnected security environment. We work closely with the Danish Ministry of Defence, the Danish Armed Forces and the political level to investigate issues and develop ideas and options.