Symposium: The Transformation of European Airpower

In 2015 the Danish Parliament will decide how to replace the Royal Danish Air Force's fleet of aging F-16's. To support political deliberation this symposium will discuss the experiences of other countries in the process of transforming airpower.

This symposium was preceded by the symposium "The Transformation of American, Canadian and Danish Airpower" held on November 12. Read more information about the event.

CMS continued to explore the multinational context within which Denmark will replace its F-16 fleet in a follow-on symposium, "Integrating Innovative Airpower", in April 2015. 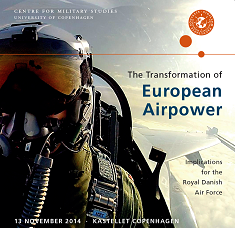