CMS is number 28 out of 104 of the world's leading international think tanks on defence and security. The ranking is a part of the yearly Global Go To Think Tank Index Reports conducted by University of Pennsylvania.

The ranking places CMS as the second best think tank on defence and security  in Scandinavia, and the Centre counts as number four on the list when comparing exclusively with university-based think tanks.

A year of research with impact
2017 has been an exciting year for CMS. The researches have amongst other things prepared publications on topics such as the changing European security situation, Greenland's importance for Danish influence in Washington, and special operations and international terrorism.

In 2018, CMS will continue to do research on topics such as grey zone strategies which is a new project funded by the Carlsberg Foundation. Furthermore focus will be on maritime crime in the Indian Ocean region which is a collaborative partnership project with United Nations Office on Drugs and Crime (UNODC).

The political parties to the new defence agreement have decided to extend the cooperation with CMS for the period 2018-2023. In addition, the parties to the defense agreement has increased CMS' grant to enhance research on risk of cyberattacks, drones and high-tech combat remedies. 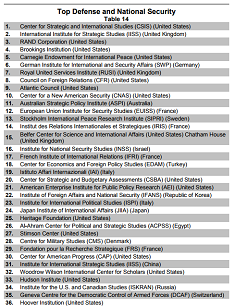 The ranking is conducted by the University of Pennsylvania’s Think Tank and Civil Societies Program.

Since 2007 it has established an annual panel consisting of several thousand experts with deep knowledge about think tanks with the aim of ranking their colleagues.