Where is the US going with NATO?

Since the war in Libya it has been argued that NATO’s role in US security is diminishing, that Washington is giving priority to Asia, and that Europe, despite the Ukraine-crisis, is more on its own. But how does the US view and debate the future utility of its oldest and largest alliance?

On the basis of his new book, ‘The US NATO debate: from Libya to Ukraine', Professor Magnus Petersson will give a talk debating this important issue.

Magnus Petersson (PhD) is Professor of Modern History at the Norwegian Institute for Defence Studies, as well as an Associate Professor at Oslo University and Stockholm University. He has been a Lecturer, Researcher, Director of Studies, and Head of Research and Development at the Swedish National Defence College (1998–2008), and Visiting Scholar at Boston University, Department of International Relations as well as Fulbright Hildeman Fellow in Scandinavian Studies at IERES, George Washington University. 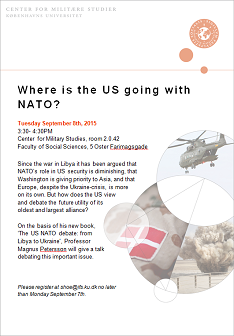