Public Lecture: Lethal Autonomous Robots and the Plight of the Noncombatant

Ongoing meetings of the UN regarding the Convention on Certain Conventional Weapons consider the many issues surrounding the use of lethal autonomous weapons systems from a variety of legal, ethical, operational, and technical perspectives. In this lecture Professor Ronald C. Arkin (Georgia Tech) will speak about the role of lethal autonomous robotic systems and warfare, and how – if developed appropriately – they may have the ability to significantly reduce civilian casualties in the battlespace.

Dr. Arkin is Regents’ Professor and Director of the Mobile Robot Laboratory in the College of Computing at Georgia Tech. 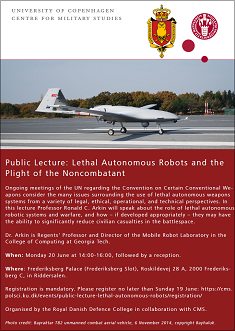