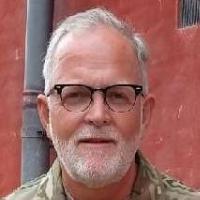 Commander Jens Wenzel Kristoffersen was born in Kampala, Uganda on the 23 of June 1961.

He started his military carrier in 1983, first as a conscript, then later as enlisted Sub Lieutenant on Fishery Protection Cutters in Greenland waters and later on environmental, anti pollution units as commanding officer. He graduated from the Royal Danish Naval Academy in 1989 followed by service on several Fast Patrol Boats (FPB) of the Willemoes-class and on the Flyvefisken-class.

In 1993 Commander Kristoffersen was selected for Junior Staff College followed by promotion to Lieutenant Commander and served as Head of the Electronic Warfare section at the Combat Action Information School and as executive officer of the FPB Mobile Missile and Radar base. From 1998 to 2000, he commanded several FPB’s of both the Willemoes-class and Flyvefisken-class. During these years, he also commanded the 42 FPB Division and was Head of Weapons department. In 2000, he was selected to General Staff Course at the Royal Danish Defence College, followed by promotion to Commander.

After General Staff course he served at Defence Command Denmark (DC DA), responsible for the Danish Navy procurement programs and international relations, including industry relations. He has represented Denmark in International bodies such as WEU, Western European Armaments Groups Panel 1 and NATO, Naval Armaments Group as well as the Defence Command Denmark coordinator for the Conference of National Armaments Director in NATO.

From 2004, he was deployed to NATO Joint Command Lisbon (JCL), as voluntary national contribution in J4, Logistics and later (2005) to J3, Operations, Joint Plans. At JCL, he was a full time member of the Joint Operational Planning Group responsible for the development of NATO Response Force Directives, Concept of Operations, Operational Plans, Standing Operational Procedures, Rules of Engagement, Targeting etc. Here he took part in NATO’s planning and relief efforts in the aftermath of Hurricane Katrina and in the earthquake relief operations to Pakistan led by JCL. In 2007, he was deployed to Africa, Ethiopia as NATO Deputy Military Liaison Officer to the African Union (AU) Mission in Sudan with the responsibility of coordinating NATO support to the African Union in cooperation with International partners and nations.

Following his posting to JCL in 2008, he again served at Defence Command Denmark, International Operations, Planning Branch, responsible for the Danish Navy international deployments and long term planning including anti-piracy operations around the Horn of Africa. At the same time he studied at the University of Copenhagen (2009-2014) obtaining his Master of Arts degree in African Studies. This was followed by service in the International Co-operation programmes branch including acting as Branch Chief responsible for Denmark’s Stabilisation Engagements in Afghanistan, East Africa and Europe in close cooperation with the Ministry of Defence and Ministry of Foreign Affairs.

From 2015 he worked as Military Analyst to the University of Copenhagen under the Department of Political Science at the Centre for Military Studies providing policy relevant research and research-based information and innovation that identify options for Denmark’s defence and security policy.

In 2016 he had the opportunity to serve at NATO Allied Maritime Command HQ in Northwood as Military Assistant to Deputy Chief of Staff Operations. A position which has given him a broad and unique insight into contemporary NATO maritime operations in cooperation with Strategic Commands as well as subordinate commands, partners and units at sea, Standing naval Forces including national authorities in support of the Office of the Operations Directorate.

In 2019-2020 he served at Joint Arctic Command as project officer. From 2020 he works as Military Analyst at the University of Copenhagen under the Department of Political Science at the Centre for Military Studies

- Current research include Climate chagge and possible implications for the Danish Armed Forces and security policy.